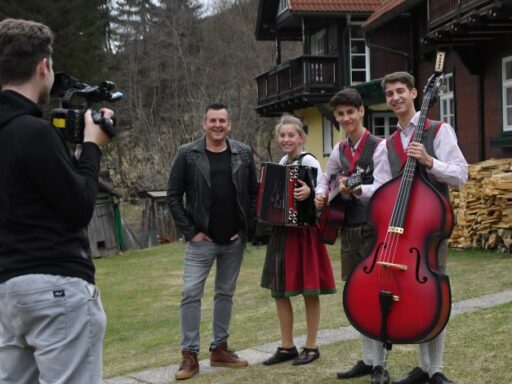 Marc Pircher, host of the show, gives young groups or artists a chance here to present themselves and their music.

The program “Mit Musi durch die Heimat” is a new hit parade with Marc Pircher on Volksmusik TV. Here, young groups or individual artists are given the chance to present themselves and their music to a large audience, just as they did at the legendary “Grand Prix of Folk Music”.

For this purpose, Marc Pircher traveled with a film team from Vorarlberg to Burgenland and visited each artist or group at home. A home story was shot by each participant at a beautiful place in his home and a music video. Both are then presented in the broadcast. The broadcast of the program takes place on the private channel Volksmusik TV twice a year and can be received in Austria, Germany and Switzerland via ASTRA. The premiere of the first broadcast is scheduled for Saturday, May 29, 2021 at 20:15 on Volksmusik TV. The second broadcast will then follow in the fall.

The goal of this new program is to present the respective artists and groups on Volksmusik TV on the one hand, and on the other hand, the groups and artists also get the rights for the titles they record. This means that when the show has run, the rights do not belong to the broadcaster, but to the artists and they can put the video on Facebook, on their homepage, on YouTube, etc.

The winner of the hit parade will be determined as follows: The first three artists or groups from the 10 participants with the most votes (via telephone voting or postcard to Volksmusik TV Berlin possible) start again automatically in the next show. As a prize, the winner will receive much more promotion on Volksmusik TV, within the bounds of possibility. Because the station is known for always making 50-minute special broadcasts by groups or artists. With a win, it is possible to get such a special show and present yourself well.

The “Mißebner Trio” will compete for Styria and “Die jungen Waldensteiner” for Lower Austria.